I have said it many times on this blog, but I’ll say it again for those that may have missed it. I love, love, love San Antonio. I love the people, the history, the Texas-Mexican culture, and yes, the vibe the city exudes. It is the epicenter of the history and culture of Texas, and exemplifies all that is great about The Lone Star State. One of my favorite parts of the city is the downtown area. I have toured the Alamo more times than I can count, but I still get excited every time I walk up to its recognizable facade. I have walked along the Riverwalk enough times to be a connoisseur of both the food, and the places to go for the perfect margarita.

No matter what activities I enjoy during the day, I always make time to stop by Mi Tierra for breakfast or dinner, and to load up on pastries.

In 1941, Pedro and Cruz Cortez opened a small three table café to serve the farmers of the San Antonio area. They were led by two simple but important principles, provide good food with uncompromising hospitality. Today, the Cortez family continue to live up to the tradition of excellence established by Pedro and Cruz.

While the original three table café has grown to a 24 hour a day operation with seating for 500 people, the legacy of great food and warm hospitality is still alive and well.

Next door to the Mercado, Mi Tierra is the perfect place to fill your need for Tex-Mex after a day of shopping.

Whether you’re looking for breakfast, lunch, or dinner, the tacos, enchiladas, fajitas, and carne asada, are all excellent, as are their traditional Mexican favorites like, cabrito and menudo. Before leaving, be sure to pick up a box or two of pastries, made fresh daily. 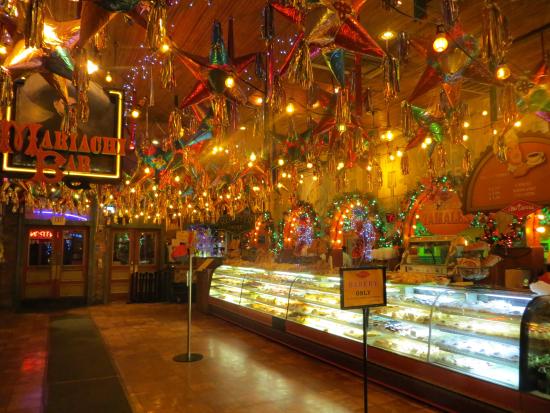 Mi Tierra is the perfect combination of tradition, history, and fantastic food, making it one of my go to destinations every time I visit San Antonio. There are only a few things that I consider myself an expert on, and good Tex-Mex is at the top of that list, so you can believe me when I tell you that a visit to Mi Tierra will never disappoint.

In the 19th century, the port city of Galveston was the center of economic activity in Texas, and with a population of 36,000, it was also the state’s largest city. As with most boom towns, there was an attitude that the good times would continue forever, but the storm clouds of doom were quite literally looming on the horizon, and the disaster they would bring would not only change the fate of Galveston, but the whole state of Texas and the nation as well.

During the 1800’s, Galveston had weathered many storms, and a dangerous complacency pervaded those who had the power and responsibility to protect the island. A seawall had been proposed by some, but was deemed too expensive and unnecessary by the city government. Even those in the local weather bureau allowed themselves to be deluded into believing that no serious storm could hit Galveston.

On September 6, 1900, a tropical storm was reported north of Key West, and by the early morning of September 7, it had made its way to New Orleans. By the time the Hurricane hit Galveston on the morning of September 8, the sustained winds were 100 mph, with gusts as high as 145 mph, making the storm a category 4. 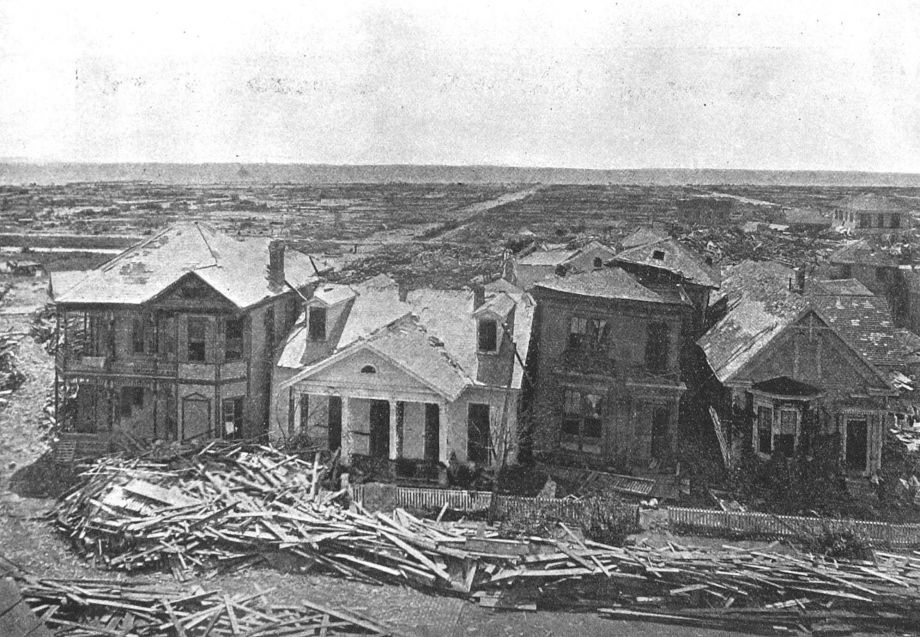 A train from Beaumont and bound for Galveston left Houston at 9:45am. Before the train reached the bay, the tracks were washed out, forcing the passengers to transfer to another train that was running on parallel tracks. After continuing on its way, the train stopped at Bolivar Peninsula to wait for the ferry that would carry them to the island. When the ferry was unable to dock due to the storm surge, ten passengers exited the train and found shelter with others at the Point Bolivar lighthouse.  The remaining 85 passengers who stayed with the train were killed when the storm surge washed all of the cars away.

The highest point on Galveston Island was only a little over eight feet above sea level, so as the water washed over the island, the fifteen-foot storm surge knocked buildings off their foundations where they were obliterated in the surf. Along with the buildings, over 3,600 houses were destroyed, not to mention, the lives of those huddled under the inadequate structures. 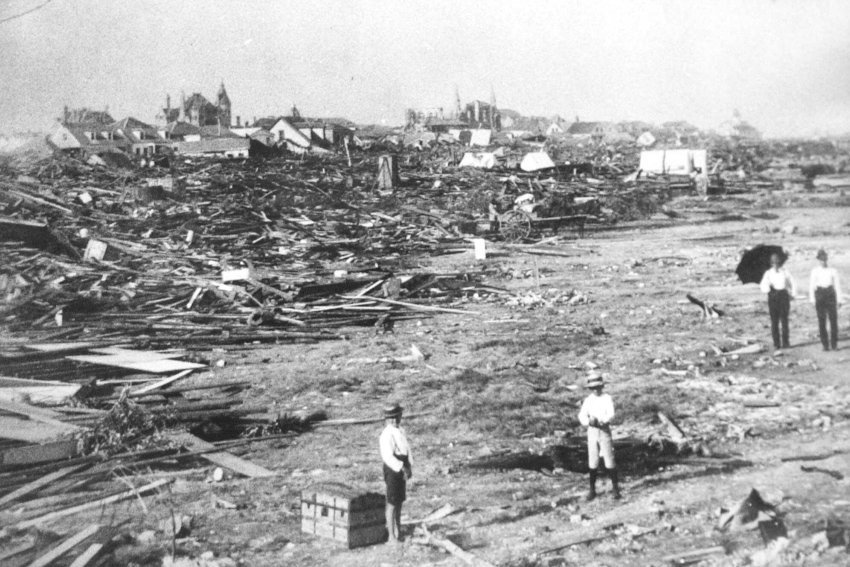 The hardest hit part of the island was that closest to the gulf side of the island. Most of the houses and buildings that were left standing were on the bay side, in a section known as the Strand District.

Rescuers set out almost immediately on the morning of September 9, but what they found was a scene of utter and total devastation. The city of Galveston was completely obliterated, and between six and eight thousand people were dead.  Most of the casualties either drowned or were crushed by debris that was carried by the massive surf. Some survived the storm, but died where they were trapped before rescuers could reach them. In the end, those who arrived to try and save lives were left with only the gruesome task of dealing with the carnage. Burying the dead was an impossibility, and funeral pyres were set up as the only means of handling the scores of bodies that littered the island. These fires burned day and night for weeks, and whiskey was provided to the workers in an effort to fortify them against the grizzly work to which they were assigned.

Within a few years of the storm, a huge dredging project was completed which raised the city of Galveston by seventeen feet, and an enormous seawall was also added to protect the city, both of which have served the island well for over a hundred years, but came much too late to save the lives of those lost.  Galveston today is a thriving community and tourist destination, but its time as an economic powerhouse was washed away in the flood waters of September 8, 1900.