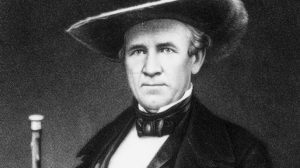 I am not usually one to roll out the same tired comparisons of historical figures, but the similarities here are so striking that to ignore them  would be to give an incomplete picture of the man, who more than any other, helped secure the meteoric rise of Texas on the world stage. Like Washington, Sam Houston was a soldier, statesman,  revolutionary, and a visionary. He saw what should be, and when the chips were down, he risked everything to see his vision to fruition, and in the end, Houston like Washington gave up the power he had achieved for the sake of the country he loved.

Sam Houston was born on March 2, 1793 in Rockbridge County Virginia to Samuel Houston and his wife Elizabeth Paxton. He was born on his father’s plantation, but like most in the planter class, the senior Houston accumulated massive debt, and the family was forced to move, in order to keep one step ahead of his creditors. Houston’s father died when he was fourteen, and he was forced to take a job as a clerk in  his older brother’s store. This was a far cry from the life of adventure that he craved, so at sixteen he ran away from home and during this time he lived with a Cherokee tribe that would become a second family to him. He developed a love for the Indians which would lead to a lifelong advocacy for peace with the Native American tribes, as well as equal treatment for all Indians.

Sam Houston served in the Army during the War of 1812 under Andrew Jackson, who would become his mentor and advocate. He was wounded in the groin by an arrow during the Creek War, but refused treatment and immediately returned to the battle. This devotion to duty earned him the respect of General Jackson, who later recommended that Houston enter politics. The two were in agreement in most areas, except when it came to the treatment of  Indians. His staunch support for Jackson as well as the Indians led to many  confrontations with his political colleagues, some of these resulted in  physical altercations.

After returning to Tennessee, Houston passed the bar and opened a legal practice, which subsequently led to his entry into politics. In 1822 he was elected to congress, where he served two terms before being elected governor of Tennessee. Sam Houston was a hard drinker as well as a hard fighter, following in the mold of his mentor, Andrew Jackson. His heavy drinking as well as rumors of infidelity, led to his resignation as governor, and to the end of his first marriage to Eliza Allen.

Houston continued his advocacy for the Indians, and in 1833 will pleading their case before congress, he got into a confrontation with Congressman William Stanbery. The brawl took place on Pennsylvania Avenue, where Houston began beating the Congressman with his hickory cane. He narrowly missed being shot when Stanbery pulled a pistol and tried shooting him, but luckily for Houston the gun misfired. It just goes to show you, there’s nothing like a good piece of hickory.

For his part in the fight, Houston was held over for trail and secured non other than Francis Scott Key as his attorney. Despite this fact, he was found guilty, but thanks to having friends in high places (the President of the United States), he was only assessed a small fine. After leaving Washington, Houston left the United States and headed for Texas.

Houston  moved to Texas in 1832 and soon took up the cause of independence from  Mexico. In October of 1835 the War for Texas began in Gonzalez, but it would an uphill struggle. The Texan revolutionaries were vastly out numbered and their cause seemed impossible, but it was at this point that Houston took a page out of George Washington’s playbook. He was named Commander-in-chief of all Texas forces and quickly realized that his vastly out manned army stood little chance of victory in open battle against Santa Anna’s army. In much the same way as George Washington won victory in the American Revolution, Houston fought a war in retreat. Instead of facing the Mexican Army on Santa Anna’s terms, Houston avoided involving his entire army in a major battle until the time was right and the odds were in his favor. Legendary battles at the Alamo and Goliad were painful defeats, but they bought time for Sam Houston to consolidate his forces and pick the one decisive battle that would win the  war.

That battle took place on April 12, 1836 at San Jacinto. Houston caught Santa Anna’s army  by surprised and won an overwhelming victory in a little more than eighteen minutes. During the battle Houston’s ankle was shattered by a bullet and he accepted Santa Anna’s surrender while receiving  medical condition. On May 14, 1836 Santa Anna signed the Treaty of Velasco, granting Texans their independence, and thereby their own country.

Sam Houston served two terms as president of the  Republic of Texas first from 1836-1838 and then again from 1841-1844, due to the constitutional provision against a President serving to consecutive terms. Never one to just take time off, in between his Presidential terms  he served as a representative from San Augustine County.

After Texas was annexed into the United States, Houston served as a Senator from 1846-1859. In 1859 he was elected Texas Governor, a post he held until he was removed from office. Like many men of his time, Houston had been a slave holder and he fought abolition, but he strongly disagreed with succession. After Texas succeeded from the Union, Houston was ordered to swear an oath to the Confederacy, and when he refused, he was forced from office. He retired from public life after this and lived quietly with his third wife Margaret Lea and their eight children. He died at his home on July 26, 1863 from pneumonia.

Sam Houston is the only person to have been elected Governor of two states within the  United States, and also the only Governor to have also been a foreign head of state. From drunk and womanizer to national hero. From slave holder to advocate for Indian rights. Like many of history’s legends, Sam  Houston was a living, breathing contradiction, much like another “Father of his country” I could name.