One of the many reasons I love San Antonio is their commitment to preserving and restoring the many sites of historical significance throughout the city. There is no better example of this commitment than the Spanish Governor’s Palace.

The presidio protected the five missions that had been established nearby, and provided escorts for the priests and settlers of San Antonio de Bexar. Fifteen families came to the area in 1731 from the Canary Islands, and would settle what is now the city of San Antonio, Texas. Captains of the garrison were assigned the palace as their personal quarters, and many occupied the home over the years.

In 1804, the last captain, Jose Menchaca, sold the home to Ignacio Perez, a very prominent businessman. The Perez family lived in the house for the next fifty years, where they saw Mexico win its independence from Spain, Texas become a republic and eventually become part of the United States.

In the 1860’s the Perez family leased the property and through the 1920’s it housed many businesses. It was a pawn shop, produce store, saloon, classroom, and a tire shop. The city of San Antonio bought the house in 1929 and completed the restoration in 1930. 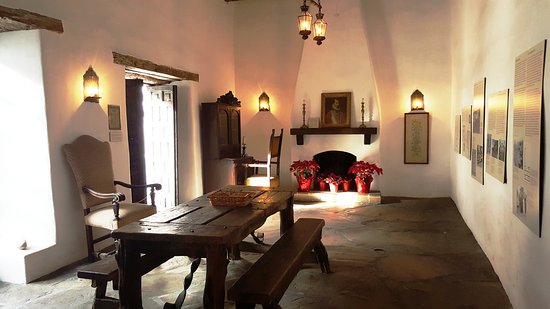 Today the Governor’s Palace has ten rooms plus a beautifully landscaped courtyard, all of which are furnished with period pieces, and is open for tours from 9:00-5:00pm Tues.-Sat. and 10:00-5:00pm on Sunday. It is located in the heart of downtown San Antonio, only minutes from the Alamo.

In an age when the old is torn down to make way for the new, and where most people think that history is nothing more than a bunch of old people and dates that have no relevance to the present, places like the Spanish Governor’s Palace are more important than ever. The history of San Antonio is the history of Texas and it is rich, vibrant, and for me it comes alive every time I visit the city. When I walk the streets, I can almost hear the voices of Bowie, Travis, and Houston, and feel the tension in the air that must have been palpable in the early days of the Texas Revolution. I am an unapologetic history geek, and sites like the Governor’s Palace is where I really feel alive.