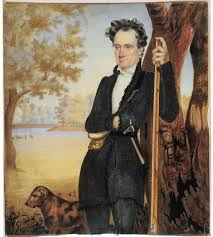 Being a very process oriented person, I figured my first entry for the Heroes and Legends of Texas section would be Stephen Fuller Austin,  the “Father of Texas.”

Most people have a fairly good grasp on the battle of the Alamo, and the War for Texas Independence, but they  have little of no knowledge of the man who made it all possible. He did not set out to build a future state, in fact like most people of achievement, he was an entrepreneur.

Stephen F. Austin was born in Virginia to Maria and Moses Austin on November 3, 1793. He was raised in Missouri, where his father owned a  lead mine. After graduating from Transylvania University in Lexington, Kentucky, where he studied law, he went to work for his father, doing clerical work for the mine.

Austin eventually made  his way into politics when he was elected to the Missouri legislature in 1813. He was re-elected each year until he  moved to Arkansas in 1819. After the panic of 1819, he was left penniless, but managed to purchase land in Arkansas in what would become Little Rock. He purchased the land as part of a speculation  scheme, that ultimately failed, and left him once again destitute.

During this time, Moses Austin had  traveled to Spanish Texas, where he secured an empresarial grant to bring three-hundred families from the  United States to Texas. However, he died  in Missouri before he could start securing colonists, and he transferred the grant to his son.

Austin was studying law in  New Orleans,  when he learned of his father’s death. He had no desire to by an empresario, but he was convinced by his mother, so in 1821 he headed  for  San Antonio, Texas to meet  with the Spanish authorities. When he arrived, he learned that Mexico had won its independence from Spain, and they now controlled Texas. Stephen was able to persuade the new  government to accept the terms that had been previously agreed to. He was given permission to settle three-hundred families between the Brazos and Colorado rivers.

Austin believed that the Texas enterprise would  enable him to repair his family’s financial situation, through land and fees charged to the settlers.

In December of 1821 Austin lead the first group of Colonists from  the United States. The panic of 1819 had caused serious financial problems for farmers, who could no longer  afford the skyrocketing prices of  land. As such they eagerly agreed to the generous terms  of the  Texas land grant, which provided 4,428 acres for ranching and 177 acres for farming. In return the settlers agreed to become Mexican citizens and to convert to Catholicism. Both of these stipulations would become the source for the hostilities that  would grow in the years  to come.

By the time Austin arrived back in San Antonio in  1822, he learned that the Mexican government had decided to withdraw their support for the Texas settlement. Stephen was forced to travel to Mexico in an  effort to save his  fledgling colony. He was able to once again persuade the government to abide by the terms of the original  agreement, by promising to be personally responsible for the settlers adherence to the terms of the deal.

Most of the Texas settlers were educated land owners from the southern part of the United  States, and as such they strongly believed in states rights of self government. They had no intentions of becoming Catholic and had very little interest in submitting to a distant Mexican  government. Over the  next several years Austin would come to regret his agreement to being responsible for the colonist’s behavior, as an increasing majority of his time would be spent in arbitrating disputes between them  and  their  Mexican benefactors.

While Austin assumed a role in overseeing the establishment of local  government, most of the day to day duties were performed by representatives that the colonists elected. Stephen mostly worked on administering the grants and  surveying the land, so that property lines were established. He also recorded titles and filed them with the  Mexican government. The money he had hoped to recoup from the venture went to  administering the colony, and the  land promised to  him by the  Mexican government would not be given until all  three-hundred families were settled in Texas.

In 1830 Mexico passed a decree outlawing slavery in  Texas, which would prove to be the most serious challenge so  far to Austin’s colony. The Texians were convinced of their right and need to own slaves, and  they were in no mood to be told they could no longer do so. For Austin’s part, his opinion on  slavery seemed  to differ depending on whom he  was talking to. He seemed to agree with the  Mexican  government that slavery  was  an evil to be eradicated, while  at the same time,  supporting the  rights of the  colony to  keep slaves. In reality he felt that slavery was basically a political issue, for which he had little  interest. All he really cared about was  the continuation of the tenuous peace he was trying to  maintain between Texas and Mexico. Austin favored the  same approach that the United States was following, and that was to kick the problem  down  the  road, and  let the  next generation solve it. This policy would eventually lead to war in both  instances, only it would come  much  sooner  for Texas.

By the 1830’s, Texas colonists numbered more than 8,000, and it became increasingly difficult for Austin to maintain control  of the settlers. With the passage of the Law of April 1, 1830, immigration from the  United States to  Texas was outlawed, and the hostilities between  Texas and Mexico began to spin out of  control. The Mexican  government was afraid that the United States would try and annex Texas with help  from the colonists, and  on April 1, 1833, it appeared that these fears were being realized. Texas held a  convention where they  drew up a list of grievances along with a constitution, and appointed Stephen Austin to present both to the Mexican President.

Stephen Austin had  persuaded Texas to support Santa Ana in his attempt to defeat President Anastsio Bustamante, believing his promise of  a more liberal democratic government. It was assumed that after his win Santa Anna would repay Texas for their support by  granting a measure of autonomous government. Little did they know that they were all about to be in for a disappointment.

Austin met with officials in  Mexico City and for a moment it seemed that the hope for self government in Texas might be realized. He was able to secure verbal agreement to a repeal of the April 6, 1830 Law, and at least a tentative acceptance of governing powers for the colonists.

The deal apparently, however, did not have the approval of President Santa Anna, because on his way home, Austin was arrested in Saltillo. He was transported back to Mexico City where he faced charges of inciting an insurrection. he was never officially charged, and after spending eighteen months in custody, he was finally freed in July 1835.

An insurmountable chasm had developed between Mexico and the Texas colony, and all efforts at appeasement and compromise proved fruitless. On October 1, 1835, in Gonzalez , the  War for Texas Independence began.

During the war Austin served as commissioner to the United States, and secured financing for arms, munitions, and a navy. After the Texas victory at San Jacinto, and the establishment of the Texas Republic, Austin served as Secretary of State under the Republic’s first president, Sam Houston. He only served a few months before dying from pneumonia on December 27, 1836

While his dream of financial success was never realized, Austin’s commitment to Texas, and his unstoppable tenacity as a leader for the colonists he helped bring here, is a legacy that all Texans benefit from to this day.